The game is currently in development for a full commercial release on Steam and Itch.io - check out the new page for more infos

Delve deep into a Zombie infested house of horrors in this PS1 styled mystery dungeon-like game. 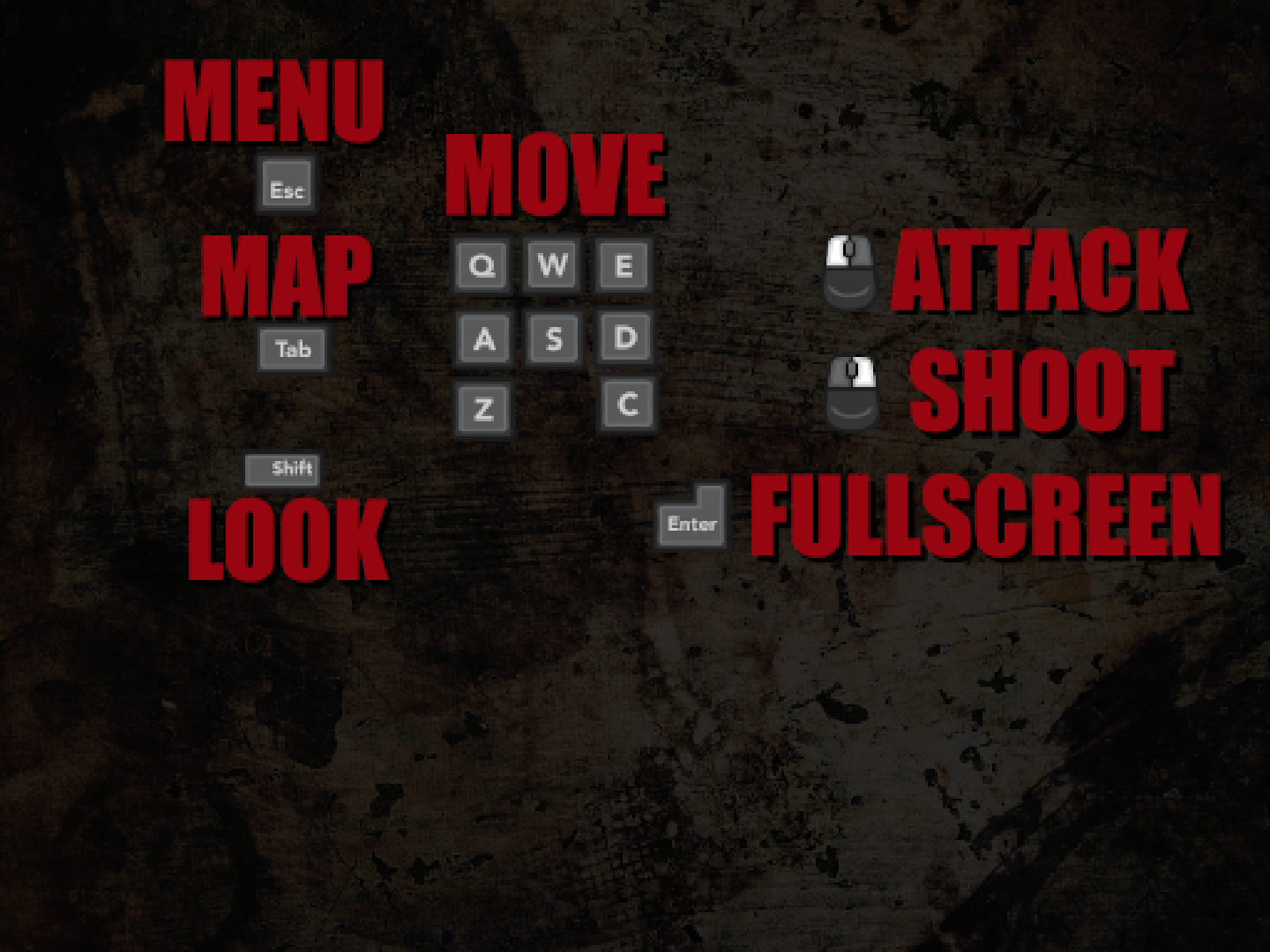 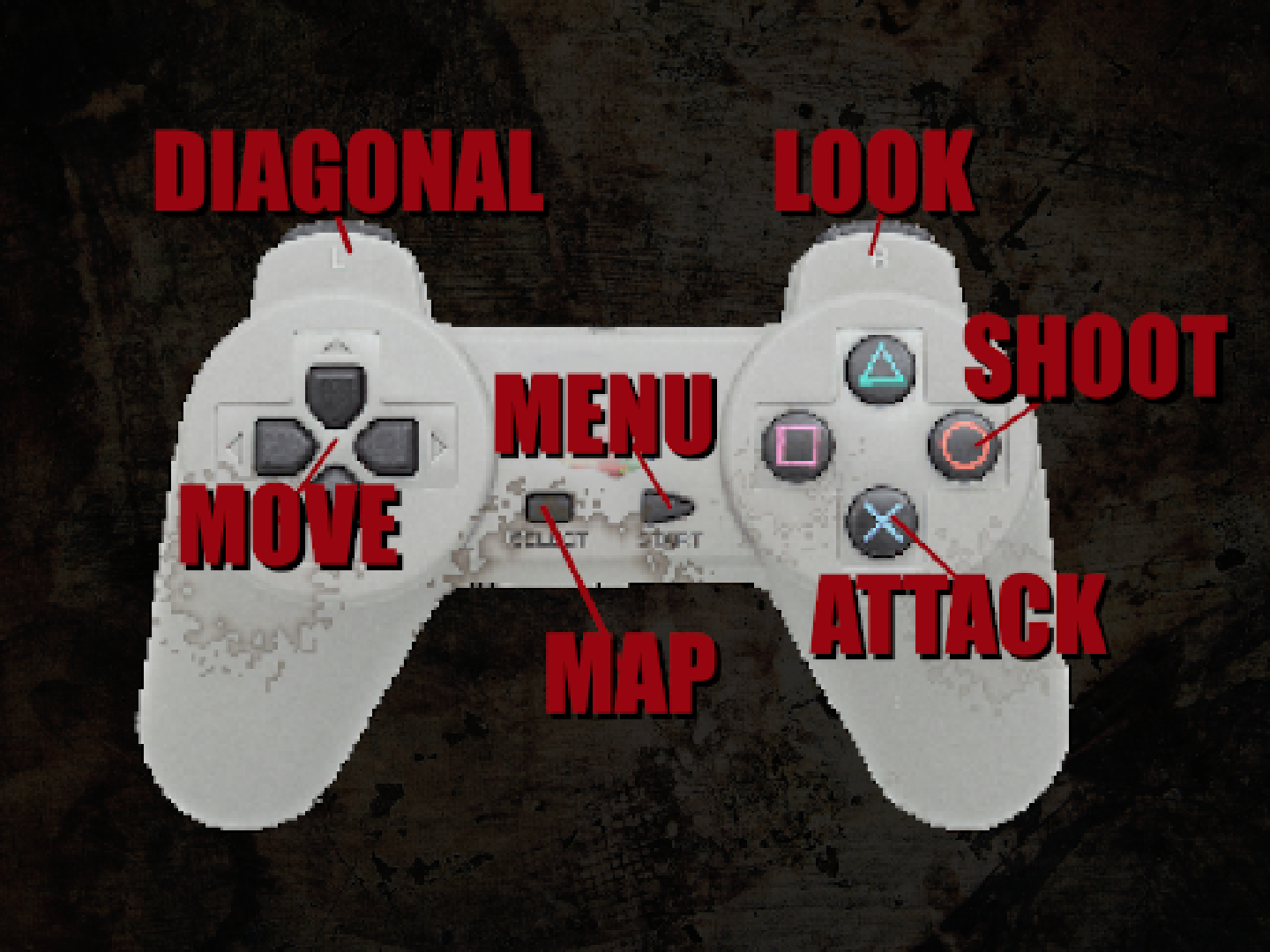 Took me a few hour-long sessions, but I managed to finally beat it. Got super lucky towards the end and found a machete that one-shot the big, hulking zombie guys. 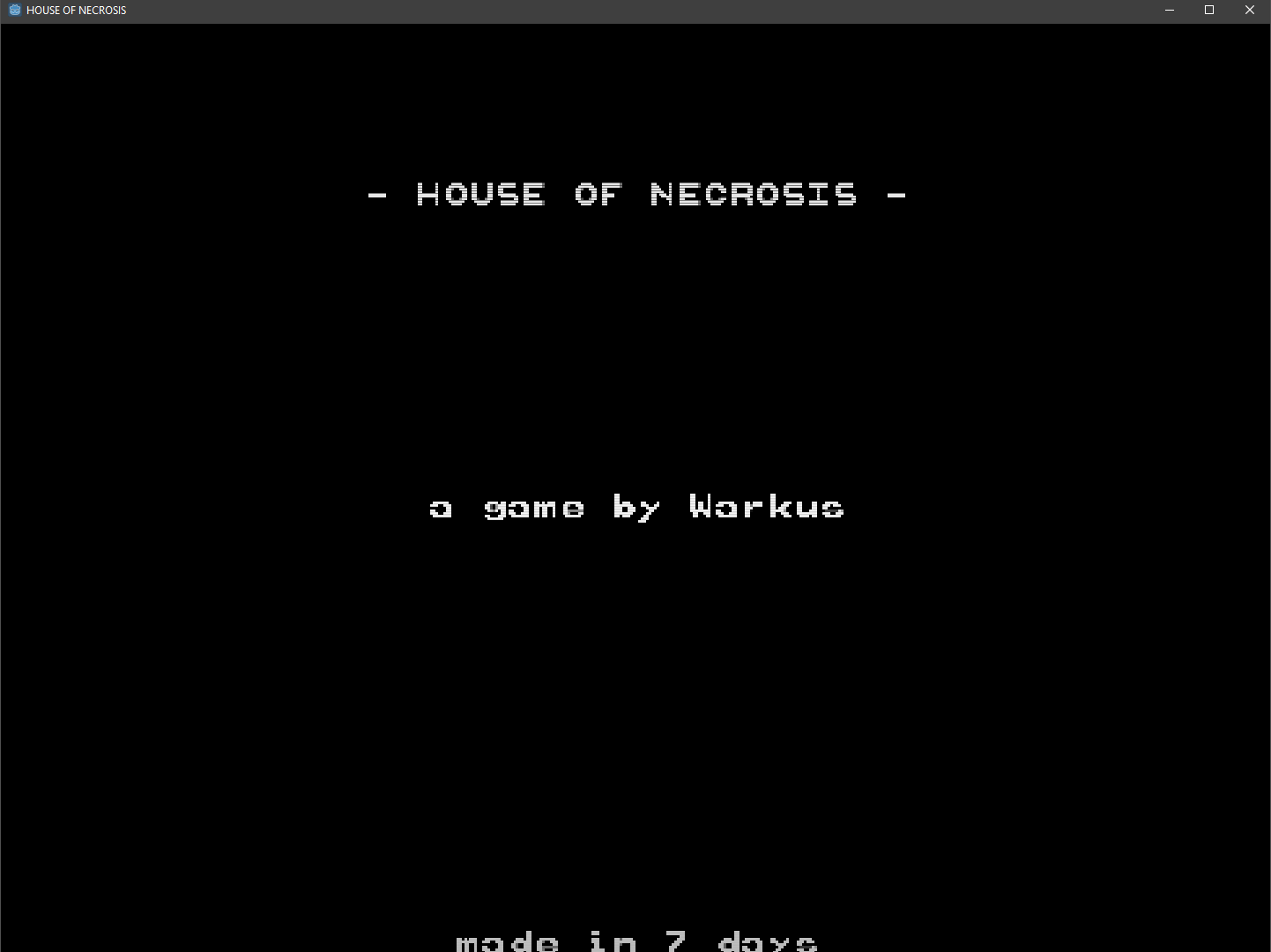 Damn good for 7 days, which isn't surprising considering how great Oceanworks turned out. There's a huge amount of room for improvement, which I know you're working on and I'm stoked for. Here's my impressions of the post-jam version though-

Those were some of the biggest things I was off with, but otherwise great framework so far. To be honest I kind of got a little addicted just trying to beat this thing, so you got a good hook going on. Super excited to see a more expanded and polished version later.

Hey, congrats on your win and thanks for the in-depth review! The current version of the game is already sooo different and pretty much all of your points have been improved on. There should be a demo coming in the next couple of months. If you enjoyed the jam version I'm sure you'll also enjoy the demo as well. Thanks again!

Reply
WoodyRun153 days ago
This idea is really cool! Really reminded me of the Mystery Dungeon Pokemon games lol. Once I got the mechanics and strategies down it got way more fun. I had a bit of issues getting anywhere in the beginning because I didn't get a single drop. Once I did get a drop it made the game much easier so maybe it's a bit too reliant on drops? If you don't have ammo or can't 1-shot enemies then you have to take damage and again, if you have no drops you have no heals either. I understand this is a 7 day project though. It'd be really cool to see a full release with an idea like this!
Reply
HappyBoi162 days ago

Keep up the good work!

The game is excellent. It's fun once you get the hangs of the mechanics, and the atmosphere is genuinely creepy and one of dread. However, it has a balance issue: the enemies drop herb too rarely or too often,  which makes every game round a dice roll.

This was a lot of fun. I really like the Resident Evil look and theme. It was really innovative how you made it turn based. Great work!

Super fun! I haven't played a lot of horror-themed roguelikes, and this one manages to be really creepy at times. I look forward to finding more cool stuff in future runs. I won my first on the back of a random +9 machete! 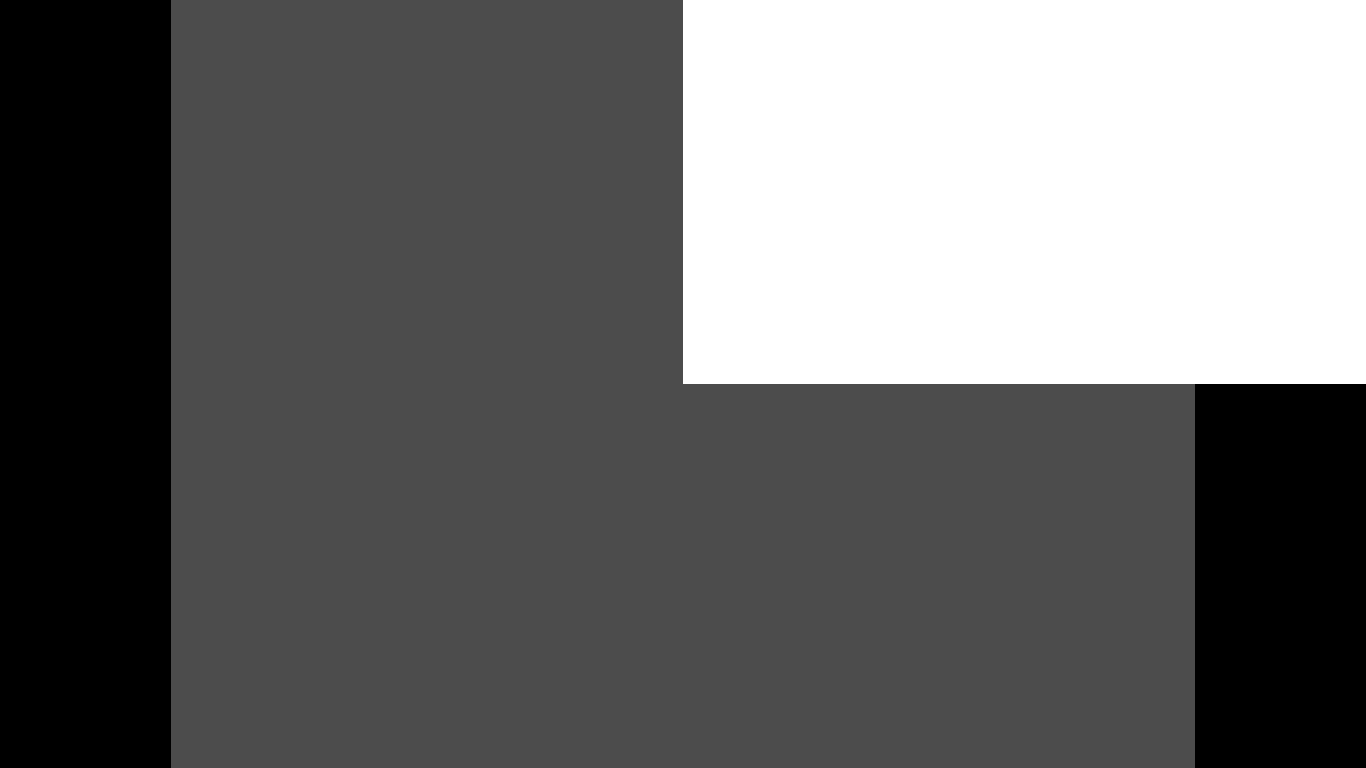 Hi! I tried to play your last update, but it has been impossible. When starting the game, audio is heard but only a gray box is visible. Attached screenshot of the problem.

I hope I can try it at some point. I have seen videos and it seemed interesting.

Hello, can you please give me some information about your hardware / OS? Thanks!

Cool game, here's the speedrun I was talking about.

Thank you so much for playing! That's a goodtime, well done!

Please, for the love of everything sacred, make this into a fully fleshed out game. This is everything I like in games mushed together and I love it!
The one thing I'd like to see added that actually feels a little bad at the moment is control rebinding. I'd much prefer to use the numpad for 8-directional walking like this. And using the mouse to click in menus where you've selected and not where the actual mouse pointer is was pretty confusing for a while, same for attacking obviously, so I'd have rather used keyboard for that too but the key that is there for that is a bit awkwardly positioned.

Other than that, just more variety and this game would be pure gold :)

Thanks for playing and the kind words! I've added numpad controls in the latest update. Let me know if that works for you. Thanks!

Yes having both hands on the keyboard (right on the numpad and left on the old action buttons) makes it all feel a lot more natural, at least to someone quite used to classic roguelikes. And no misclicks happened in this playthrough :)

Finally got to floor 11 and wow, that's quite the jump in difficulty (doesn't help that I started in a room with 4 of those blue dudes.)

Discovered some new things though. When getting out the grid to aim you can't use numpad to turn around, just the old keys.

The other was that I once saw a dog in a + shaped crossway where it was in one of the paths but visually it was in another one diagonally from it (but the map showed the true position) and when I stood where its graphics showed it to be, it attacked against the tile where it really stood to hurt me. Odd glitch.

Again, great game, its only flaws born out of the time constraints of the jam.

If you ever go ahead and expand it I'd love to lend some help with playtesting and/or graphics if you need a hand with that.

Saw the same error where an enemy was graphically on a diagonal tile away from where it really was and I had to look at the map to see its true location, this time with a zombie in an open room so it doesn't seem to be geometry specific or enemy type specific. The only thing that's been the same between the two times I encountered the bug is there being a wall next to an enemy's real position but that's not much to go by =P

Another thing I've noticed is that rarely but sometimes you can see the outside walls of a room, at first I thought it was perhaps secret areas that could be accessed because I only saw a single tile of it the first few times but my last run I saw it for an entire corridor.

I totally agree about expanding it into a full game! I'd buy it for sure!

From looking at this game, it reminds me of Koudelka (grid-based movement and attack), and Parasite Eve.  I may have to download this and give a whirl.  I hope you continue to make more games like this.

I was really enjoying this...until it crashed to desktop when I went down the stairs from 8F to 9F. Great work apart from that, though.

Hey sorry about that! Can you give me some infos about your setup (OS, GPU, etc.)? Thanks!

Thanks! I'll look into it

It might be nothing, I haven't tried to reproduce it yet. In any case, great work on the game. I'm impressed that it manages to put the essence of survival horror into a roguelike, and that visual style is so nostalgic!

I've got an almost identical setup to that guy and I've had two crashes in half an hour that both happened when I click something as the game over message appears. No biggie since I already lost but still =P Could be related to the floor switching crash which I haven't experienced myself.

Just wanted to let you know that this issue should hopefully be fixed in the latest update. Please let me know if there are any other issues. Thanks!

Gave it a Let's Play, hard as I'd want it to be, reminded me of Chocobo's Dungeon days, got pretty far I'd hope for just 40 minutes of play, will try to get deeper/beat it :P Nicely compact but effective game in just 7 days.

Was it just the map that didn't display the hallway or was the room actually cut off? Either way, I've checked that the exit is always accessible from the starting position. So yeah, gotta fix that but it shouldn't be  actually game breaking

The rooms were just cut off and yeah exit's were always available.

Reply
Suspended account202 days ago
Reply
Levont202 days ago(+1)(-3)
Here's my channel for other games I have played. https://www.youtube.com/c/levont

The game's really fun and for the most part, I enjoyed it. It reminds me a bit of Pokemon Mystery Dungeon. I'd only suggest a few things:

Having the map show enemies if you have line of sight.

The ability to see what's in front of you two tiles when you are walking towards the camera.

Other then that, game's fairly solid.

Movement and controls are very disorienting, AI needs a lot of work truly and overall did not enjoy it. I read that everything in the game is intentional, so if it's trying to be intentionally bad, then it succeeded. graphics are okay.

Another great game, Warkus! There is some serious bullshittery going on with some of the mechanics, but learning to prepare for and overcome the bullshit was part of the charm in a way.

Some major ones are:

- Enemies move at the same speed as you, so as soon as you move within one tile of an enemy they will continue to follow you at the same pace, making it impossible to run away. Because of this, you WILL take as many hits as it takes for you to kill them with a melee weapon.

- Going south through a hallway makes it so that you cannot see what is 2 spaces ahead of you. Also, opening your map one square before a room doesn't populate it like going another direction does, so going south should always be avoided unless necessary.

- Until you get a melee weapon kit or weapon upgrade (I assume the crowbar does more base damage than the knife?) you cannot one shot any enemies. So until you get one of those, you cannot safely farm for XP unless you use a bullet which you should really save for...

- Enemies can spawn in hallways, which can be impossible to bypass without taking damage if you don't have a weapon upgrade or ammo.

- The previous point is especially bad when you get to the green area as those enemies are particularly nasty if you need to stand next to them.

Also, I'm not sure if it's intended, but you can use herbs to bypass your max HP. At first I thought it's always better to immediately use them as soon as you get them, but the poison enemies kind of make is so if you need to get hit by one, it's best to farm all the ones you can for XP and then use an herb before venturing into potentially dangerous territory.

The game really kept my attention for a while and trying to figure out how to deal with all the bullshit was actually kinda fun. Here's a screenshot of as far as I could get (the guy in front of me needs 2 hits from my melee, but I'm going to die on the next turn and there's nothing I can do).

Thanks for another amazing game, Warkus! 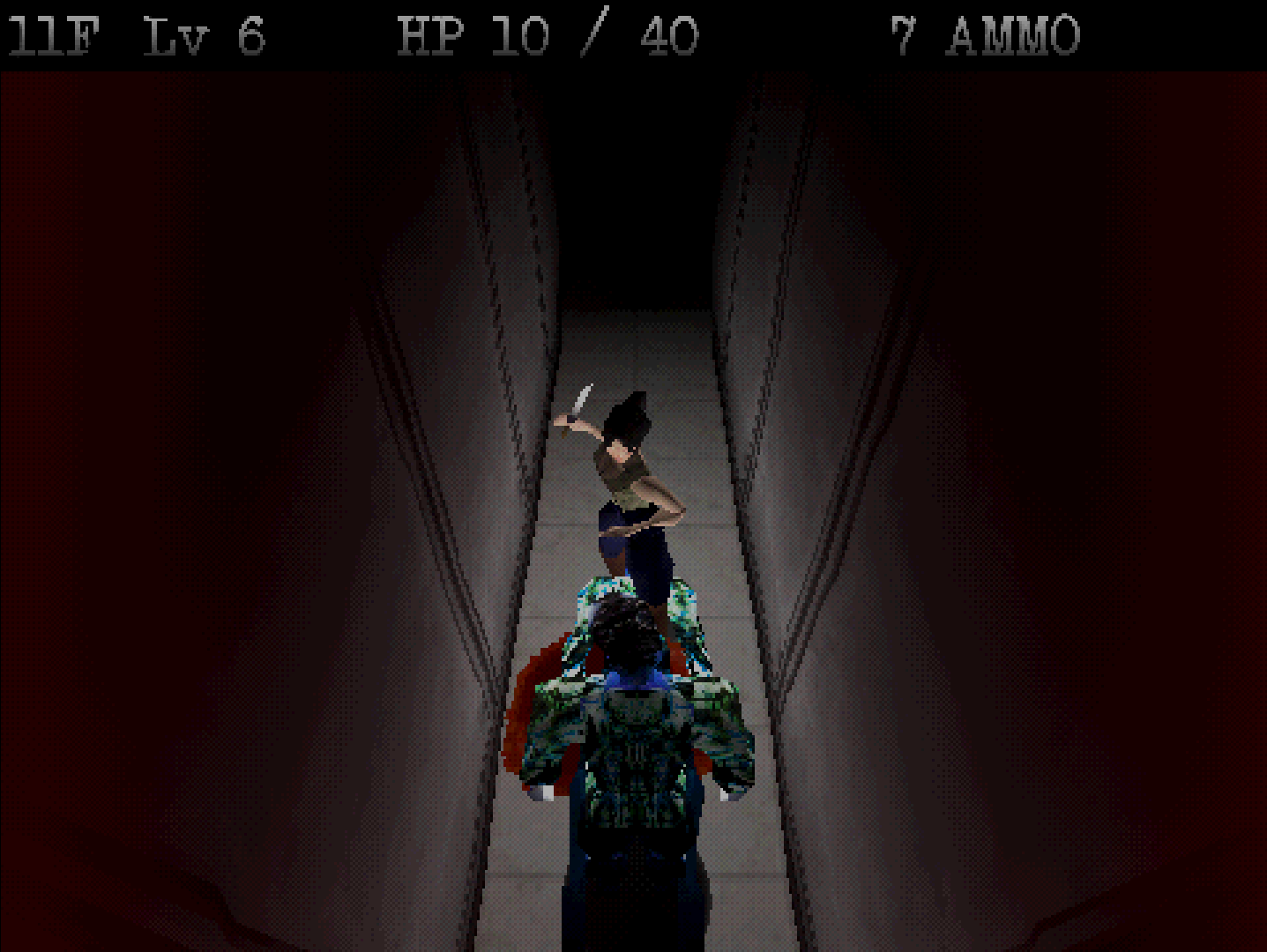 Hey, thanks for playing! Yep - everything you've mentioned is intentional. More or less all intricacies of mystery dungeon games. Oh and btw. there's an actual end if you want to come back to this game sometime again ;)

Never played a mystery dungeon game before, only heard of the pokemon ones and I'm surprised if they play similar to this haha.

Oh, I figured it would just procedurally generate forever. Guess I will have to give it another try to play it to the end then! 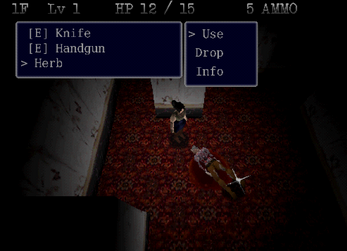 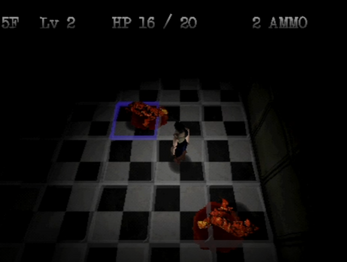 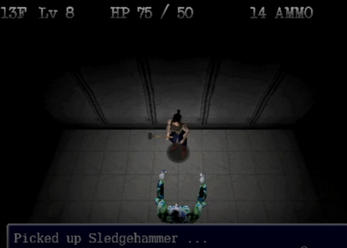 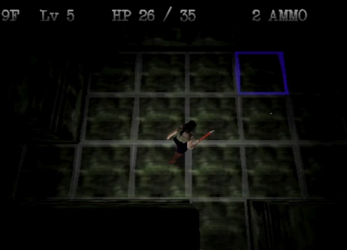 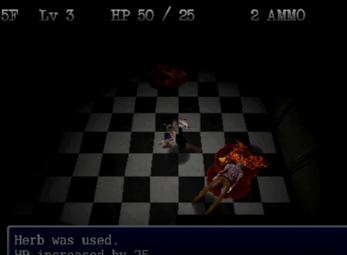 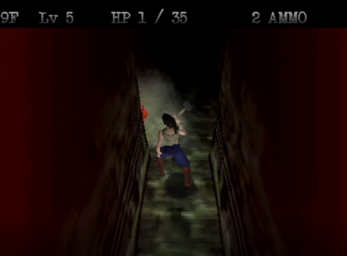